The City of Toronto’s Medical Officer of Health has sounded the alarm on traffic-related air pollution (TRAP), and proposed a set of sweeping measures to protect human health.

According to a new report, if you live near a busy road or highway in Toronto, you are “more likely to experience adverse health outcomes including breathing problems, heart disease, cancer, and premature death.” Children, the elderly, and people with pre-existing medical conditions are particularly vulnerable to these impacts. 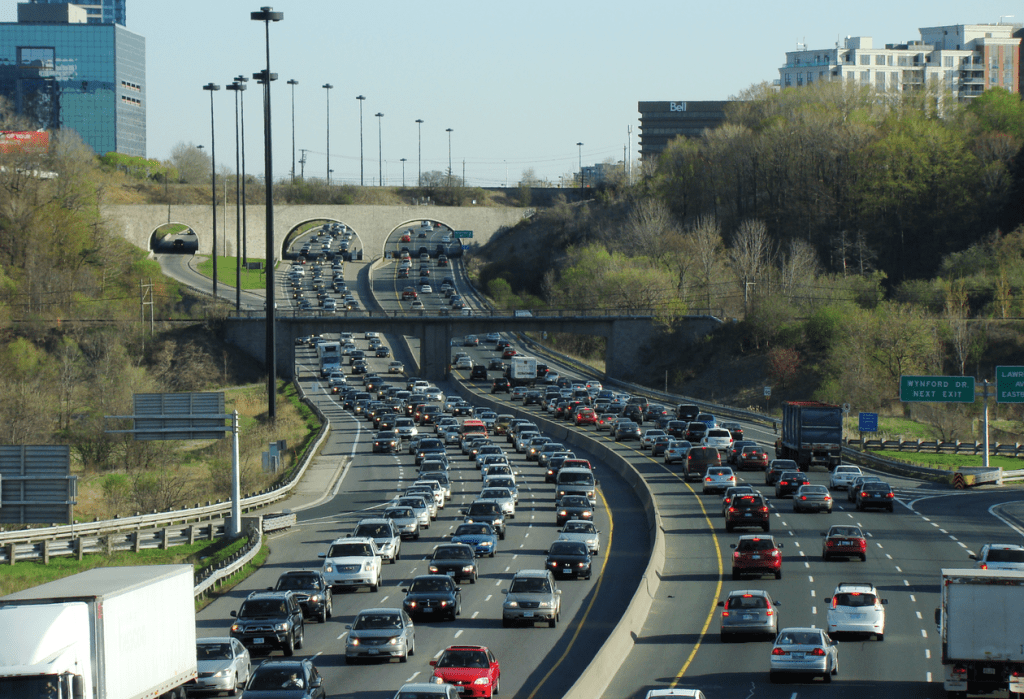 This data may be specific to Toronto, but it’s safe to assume that anyone in Ontario living close to a heavily-trafficked road or highway is at greater risk of these same health outcomes. What comes out of a tailpipe in Toronto is the same polluting mixture of CO2, sulphur dioxide, nitrogen dioxide, carbon monoxide, benzene, formaldehyde and other unpronounceable toxins coming out of tailpipes everywhere.

Toronto’s air is a lot better than it used to be, largely thanks to Ontario’s bold step of end ending coal power. Pollution-wise, this step was equivalent to taking 7 million gas-powered cars off the road and is widely credited with bringing Ontario’s annual smog days from 53 in 2005 to zero in 2016. Now that the low-hanging carbon fruit has been picked, it’s time to hone in on the next biggest polluter on the list: the transportation sector.

And guess what’s the largest emitter within this sector:  it’s the personal vehicle.

If we only had a way to eliminate the single largest polluter from the sector producing the most pollution. Oh wait, we do. Electric Vehicles (EVs). No tailpipe emissions, quiet as a mouse, and undeniably trendy.

No longer a far-off dream of an imaginary future world, EVs are now a reality.  As battery technology advances, charging station networks expand, EV discovery centres pop up for consumers to test drive new models, and governments ramp up incentives to lower the costs of these vehicles, EVs are becoming more and more accessible to consumers.

Many financial analysts believe that EVs will cost roughly the same as combustion-engine models by 2018 – just a little over a year away. In many countries, governments are moving to outright ban traditional gas-powered vehicles by 2040.

If EV adoption takes off in the way experts predict, we could see drastic reductions in traffic-related air pollution, which will translate into major improvements for human health and for the planet.

The momentum is there, but is this transition happening fast enough to protect our health and reach our climate targets? Ontario’s climate plan calls for five per cent of new passenger vehicles sold or leased in the province to be electric or hydrogen-powered by 2020. Sales are picking up in Ontario now that more infrastructure and incentives are available, but EVs are still hovering at around one per cent of total sales.

To hit these targets – and to fix Toronto’s air quality – we need car dealers and consumers in Ontario to follow the worldwide trend and commit to EVs in a real way.

That doesn’t mean dropping everything and running out to by an EV. Instead, we should all consider making our next vehicle electric. When that gas guzzler is ready for retirement, you owe it to yourself to test drive an EV. Based on the reviews, you’ll be very impressed.